A 73 year old female was seen in consultation from infectious disease for chronic osteomyeilits of the right tibia, talus, and calcaneus.  This patient communicated that she was depressed about her chronic leg condition and the real possibility of a leg amputation as well being fatigued from the constant pain in her leg. This patient had an unstable charcot ankle that underwent attempted fusion with an intramedullary nail that subsequently developed a tibia osteomyelitis with two draining sinus tracts.  The intramedullary nail was removed by that same surgeon and the patient was placed on appropriate IV antibiotics/antifungal medication and received HBOT therapy. Deep soft tissue cultures demonstrated yeast, fungus, and mrsa,   and pseudomonas aeruginusa.  After seeing several other physicians that recommendations that she received was live with the current pain and draining sinuses or undergo a below the knee amputation that may have to revised to am above the knee amputation.   Initial CRP was 8.5. 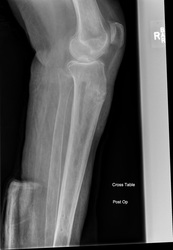 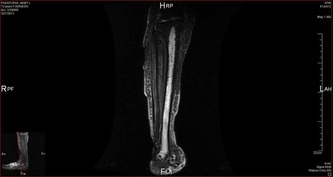 To avoid a below amputation, the PAD-T was utilized and the complete surgical intervention and treatment was completed through a single soft tissue incision followed by a single bone cortex incision from the plantar heel.  A single bone cortex incision was made through the plantar calcaneus and the steinman pin was advanced as far proximal as possible (below, top left).  Then the kyphon device is advanced as far proximally as allowed.  Because of the spongiosum destruction from the bone infection a path of least resistance  was created by the bone infection,  this path of least resistance extended to the proximal tibia.  The remaining images demonstrate that the bone void filler loaded with tobramyacin and voriconazole easily moves along the path of least resistance created by the bone infection and fills the entire infected tibia, talus, and calcaneus through a single plantar calcaneal bone cortex incision. 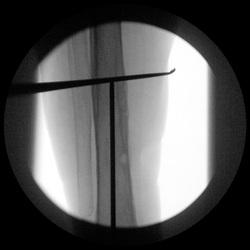 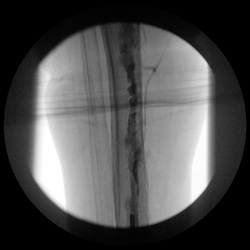 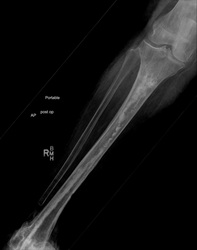 This patient progressed nicely.  The two sinus tracts/wounds were healed within two weeks.  The patient progressed as expected with immediate partial weight bearing with full weight bearing at week three.  IV antibiotics and antifungal medication was continued for one month post-operatively then discontinued.  At the last visit at post-operative month three the patient was completely pain free and had no wound issues.  CRP returned to normal at 0.7. Long term follow up is planned.
UA-36925319-1 UA-36925319-1