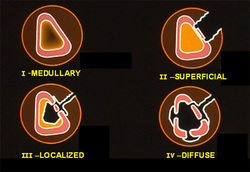 Cierny and Mader classified osteomyelitis based on the affected portion of the bone, the physiologic status of the host and the local environment. This classification lends itself to the treatment and prognosis of osteomyelitis; stage 1 (medullary osteomyelitis) can usually be treated with antibiotics alone, while stages 2, 3 and 4 (superficial, localized and diffuse osteomyelitis) usually require aggressive debridement, antimicrobial therapy and subsequent orthopedic reconstruction.

Superficial osteomyelitis is a true contiguous focus infection of bone; it occurs when an exposed infected necrotic surface of bone lies at the base of a soft-tissue wound.

Localized osteomyelitis is usually characterized by a full thickness, cortical sequestration which can be removed surgically without compromising bony stability.